← The Four Flavors of Respect
Putting the Pieces Together →

After some time off over the summer, we’re back with more! 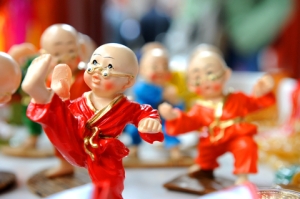 One martial arts tactic that translates well to litigation and other high conflict, win or lose situations is the multi-level attack. A negotiator can use it too, but if the relationship between the parties is important it can backfire and inflame tensions.

The multi-level attack relies on the fact that people have trouble keeping their attention on more than one dangerous stimulus at a time. There are two related versions. One is to distract (feint) and to strike. The other is to hit two spots at the same time.

Distract and strike carries over the best. In the well-known “jab-cross” that boxers use, the jab is a poke with one fist to draw the opponent’s attention, and the cross is a second punch with power that follows an instant later. There are many kung fu techniques that involve a snap kick to the groin that may or may not make contact, followed up an instant later with a strike to the face or another vulnerable spot. Distract your opponent with one thing, then follow up with a hard-pressed point that is really important to you. It is a variation on what negotiation theorists call “positional bargaining” in which a party stakes out a strong position knowing that he will back off of it in exchange for a concession elsewhere.

Other techniques involve striking more than one place. For instance, a complicated move from the Hung Gar Tiger-Crane set is called “Crane Flashes Wings”: one hand blocks, the other slashes across the opponent’s eyes while a snap kick comes in from below. Northern Shaolin Long Fist has a number of these techniques, including the well-known “Simultaneous Kick and Punch”: a snap kick to the groin and a punch toward the face, followed by a very powerful punch that will break your hand if you are not prepared to follow through. Even Yang style taiji has a nasty (and impractical) move with the poetic name “Step Up, Advance Seven Stars,” which is either (i) a simultaneous kick and crushing of the windpipe or (ii) a simultaneous low kick, punch to the midsection and punch to the face. In litigation, the equivalent is filing multiple motions, separating issues into multiple pieces of paper to appear before the court or even filing multiple complaints. I have been involved in a few disputes in which there were five or six separate actions pending in five or six separate state and Federal courts on essentially the same matter. By focusing the opponent’s attention on multiple attacks, this approach runs up the cost and the annoyance of continuing the conflict for the opponent. It is useful to demonstrate overwhelming strength, resources and determination, but is most often used when one is weak and wants to pick up a few victories to turn the tide of the conflict.

If you are on the other side of one of these attacks, your options may be limited. In martial arts, the masters have developed a counter-technique for each technique that might be used against them. In personal interactions, your response may be to step back and not engage (what the martial artists call a “yin block”), or to engage on each point if you do not know what is meaningful, or to draw the conversation to the point you deem the other side’s position to be weakest (the equivalent of the martial arts joint lock). In litigation, you have to respond or risk default, although motion practice and asking for continuances attenuates the power of the attack while running up the cost of continuing the dispute for both parties. Continuing the pain can be a good strategy, since people often agree to resolve disputes only after they are tired of the fight.

In a confrontational situation, conflict fatigue can help parties step back and engage in “interest based negotiation” – figuring out what is important, negotiating about that and letting the rest fall into place. It is like being able to tell the feint from the strike, or knowing how to push the opponent off balance so his wildly swinging fists do not strike their target. Sometimes you have to carry on the fight long enough to get there.

← The Four Flavors of Respect
Putting the Pieces Together →