The Kung Fu Mediation blog has three groups of readers:  martial arts people, negotiation/dispute resolution people and those who do both.  This post is aimed at martial arts readers.

I’ve received e-mails from all over the world in response to a post from a few months ago on How to Make and Use Dit Da Jow, which in turn was a follow-up to a post on Kung Fu Negotiation: The Iron Palm. People have been asking for more information on how to make Dit Da Jow, an herbal compound that is supposed to toughen the skin and reduce injury from repeated strikes.

My English handwriting is bad and Chinese handwriting is even worse. However, if you don’t mind squiggles, please click on the link for a PDF of a Dit Da Jow Recipe that you can print out and take to a Chinese herbalist. The herbs should cost less than $10. The prior post explains what to do once you’ve acquired the ingredients.

In addition to the disclaimers in the earlier post, please be aware that:

Finally, please, please remember that while Dit Da Jow helps, it’s not magic. It is easy to break your hand or wrist when you are trying to break too many boards (at higher levels, coconuts are a traditional target, too – but not for old guys like me). Train safely!

A reader has shared the following screen shot from World of Warcraft – dit da jow in his backpack.

“A special linament of several different herbs combined in a secret formula. Guaranteed [in the game] to instantly heal bruises and fight injuries.”

Thanks to Master Alden Ludlow, a musician, historian, Renaissance man and holder of advanced degree black belts in kempo and kung fu.

Trust: The Power Behind The Punch

Negotiation has two goals: convincing the other party to accept your position and convincing them that you will follow through. Many pixels have been spilled over persuasive technique, interest-based negotiation and the like. In most business negotiation, though, trust is also an issue. How do you convey the sincerity and trustworthiness that is needed to make any kind of agreement stick?  People generally will not enter into an agreement with someone they do not trust to live up to their end of the bargain, especially if the agreement is in settlement of an argument. The difficult part is finding a way that works for both parties.

In martial arts terms, the negotiating technique is like the way you wave around your hands and feet. It is the outer form of persuasion, which is important but not sufficient. Knowing how to make the persuasion meaningful is the equivalent of packing power in your punch. You can do it through brute strength (the equivalent of, “You will agree to my terms or else”) or through internal power moves that vary with the technique being applied (“I know this point is important to you”).

On the one hand, it means you have to listen to the other party to try to tell how to get the message through. That can be difficult enough, like looking for an opening to attack. Then you have to find a way to come across as sincere, and not just in the way of a con man that offers sincerity without substance. Some people are comfortable with overt emotional appeals. When other people try that, it seems phony and reduces credibility. Some people can express clear, logical, persuasive arguments. When other people try that, it sounds like a middle school debate team. Some people consciously modulate their facial expression, body language and even breathing. Others seem uncomfortable in their skin when they try that, especially if they try it in a cross-cultural setting in which each party uses different cues. Sometimes, conveying trust means setting up backstops, like escrows or penalties, so your counterparty believes you will follow through.

In martial arts, the rubber meets the road at the point of physical contact between you and your counterpart. After contact, if there’s no power, there’s no effect. In negotiation, the force of the impact is in the tone as much as the message. Most of the time, you will do well if you can find a way to convey a cooperative, trustworthy tone that works for you and connects with your counterparty.

Negotiating With a Leopard 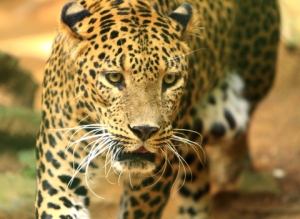 There are tens of thousands of styles of kung fu. Formalized systems started at least 1,500 years ago and are tied, in popular imagination at least, to the famous Shaolin Buddhist Monastery. There’s a fascinating contrast between peace and violence – zen originally came from Shaolin too.

You may have heard of the Shaolin animal forms, in which the practitioner mimics the movements and, indeed, the strategies of a particular animal. Practitioners refer to the “spirit” of the animal. The forms arose from the observation that people move their bodies in different ways. Since in the traditional way of thought each animal is associated with one of the five elements, the forms tie in well with the notion from Chinese medicine that different people have different balances of elements within them, affecting their personalities as well as their physical bodies. In many systems, the leopard is wood; the snake is earth; the tiger is fire; the crane is air; and the dragon is water. Nobody is innately a pure leopard or pure crane, but we all have natural movements that we slip into in times of stress or conflict.

Let’s start with the leopard. Leopard people hold themselves solidly, like a tree. They store tension in their backs. They often gesture with short, choppy movements of the upper body. In martial arts applications, their power would come from strong, fast muscles, keeping the spine tight yet flexible like a tree trunk while driving from the hip. It is amazing how often one sees people unconsciously adopting those body movements as they become agitated.

The leopard moves quietly, like a cat, but uses its strength up quickly. One of the strategies for dealing with them is to take advantage of that tendency. Leopard folks often put up a major struggle early in a negotiation or mediation. They need a release. After the initial burst of energy, they tire and become more amenable to the process. Whether it is an emotional, intellectual or just blowing off steam release depends on the context.

People who study certain of the karate forms adopt some of the body mechanics of the leopard, it seems. Those sharp chops work! Every block is a bone break! I’ve even seen little league batting coaches teach some leopard-like movements. However, these ways of approaching an opponent may not be a person’s natural way of dealing with conflict. Sometimes when people adopt learned behaviors, the intercessor (that would be me or another lawyer or mediator) has to look past the surface. It’s especially true with leopard movements, since so many people have been exposed to them.

When I was first learning how to mediate, I was in a session in which one of the parties was a contractor. I can’t remember the issues or how much they were arguing about, but I noticed the contractor starting to slash his hands around with characteristic leopard-like movements. It was striking: he was even moving the core of his body like a leopard. He was actually so close to being out of control that I felt there was a physical risk. It was a tough call: call off or suspend the session for safety, let him continue on the verbal attack until his juices stopped flowing, or intervene? Fortunately, the contractor limited his physical aggression to table pounding. The person on the other side of the table could take it, avoiding the personal nature of the attacks without getting too riled up. I think he carried himself like a snake (the subject of a future post). As Mr. Leopard wore himself out, his attention could be redirected to a more constructive place. As he physically relaxed, his movements even changed to be less jerky, suggesting that, perhaps, somewhere along the way, he had learned a response to conflict that worked some of the time, but tired him out even more than it would a natural leopard type. The parties eventually settled on a creative solution.