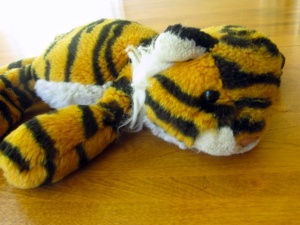 Tiger kung fu forms can be fun to practice. They often have big, athletic movements with leaps and yells. The outer layer of applications is easy to see (although each form still has layer upon layer of hidden applications).

Not every movement is a useful application for everyone, though. Many tiger movements work best for big, athletic people, but not so much for smaller folks. After all, in the wild, the tiger is a large and powerful predator.

On the flip side, not every big, athletic person moves like a tiger. The physiology of the tiger has certain requirements, but a person must have the right neurology, too. Some people are more lumbering than aggressive, or don’t have the coordination to do well with some of the more circular movements.

In a negotiation, some people use their positions within their organizations to let loose their aggressions. We see this often in lawyers: in their personal lives they may be meek, but when they are arguing on behalf of someone else they can be aggressive to the point of being offensive. Like people who just go through the motions of being a tiger, it is not what they really are, and to many of their counterparties the inauthenticity is more annoying than effective. One tactic you can take with the fake tiger is to follow the classic Art of War:  “If you know your enemy has a bad temper, seek to irritate him!” Then he will make mistakes. Alternatively, you can also appeal to his vanity or insecurity.

If you negotiate from a point of inauthenticity, your counterparty can take advantage of your weakness. The fake tiger isn’t really passionate, just a loudmouth. The fake snake isn’t really cunning, just transparently sneaky. Learn your own natural negotiating style! As the Art of War also advises, “If you know your enemy and know yourself, you will face a hundred battles without danger.”

Next post, we will go back to the big-picture discussion with the Shaolin Crane, but first I wanted to give you a sense of how these academic-sounding themes can play out in the real world.