Negotiating With A Crane 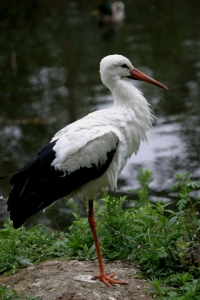 Negotiating with a crane, whose element is air, requires taking care not to fall into a trap.

If you ever see cranes or herons fighting, they flap their wings a lot. They have thin, hollow bones, so much of the flapping is to deflect anything coming in from their opponent. They evade.

So, too, with crane kung fu forms.  In martial arts theory, there are two kinds of blocks, yin blocks and yang blocks.  A yang block is force on force, using your strength to counter a blow.  A yin block is not being there when the punch is ready to make contact. Crane forms certainly have yang elements, but do rely heavily on yin blocks. Evading and redirecting other people’s force is one of the things the crane is known for. A good crane’s effortless redirection makes one feel like one is punching at air.

When I was first learning a crane form, I was told to (i) take everything about the tiger form that makes it a tiger and (ii) take it out. The rote memorization of the tigery forms I know were harder to learn, but the crane has been much harder to master. Crane forms done well look light, airy and graceful. For many of us, I’m reminded of a Chinese saying about efforts undertaken in vain: “A tiger drawn badly looks like a dog, and a heron drawn badly looks like a duck!”

A crane’s evasiveness can come across as passive-aggressive or conflict avoidant. There are some people with whom it is hard to carry on a difficult conversation because they just won’t engage.That is a valid strategy. If you encounter it, the best thing to do is to decide whether the non-engagement is based on fear of conflict or on calculation. If it is the latter, the goal, conscious or unconscious, may be to draw you into a position in which you are subject to attack. You can respond in kind, but then the negotiation can consist of wing flapping without getting much done. Conversations between two crane types can be difficult even for the best mediators, since issues become hard to resolve if neither of the parties will pin themselves down to a concrete conversation about the issues. The aggressive tiger may find himself caught in a trap the crane set as she withdrew or become so frustrated that he makes mistakes. A better response might snakelike: be calculating back.

Crane tendencies are hard to spot in the way that people carry themselves. Many people who do crane forms well have thin bodies and long limbs, although some bulked-up middle-aged men are excellent at it – it’s a question of body control. Look for people who hold their spines stiffly, like the leopard, but move fluidly. Still, gracefulness is a rare commodity. Sometimes the essence of redirection is to redirect our attention.

The theorists among you may see shades of the Thomas-Kilmann conflict modes, but that’s for another discussion.